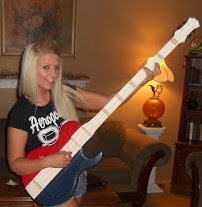 This was first brought to me by a friend who won it in an auction for $2.00. It was plain, light colored wood, no strings, no knobs, and no tuning knobs. I mean plain Jane! It had been handmade by someone with a lot of patience lol.. I could not have taken the time to make this, that's for sure.

Anyways, my friend wanted it to be painted somehow so that they could display it for Fourth of July at his new house, on the porch. 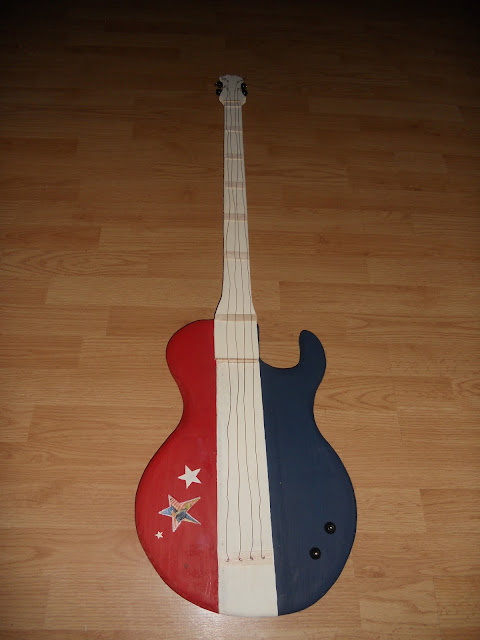 And here's what I done to it. Let me say this, he did not want the "rustic" look on the guitar. That made me soooo sad, cause I know with some scuffs and such, it could have had a real nice worn look to it. I just don't care for the "just painted" look. I do wish he woulda wanted the ruffer look....oh well...

I even had to take some dowel rods and cut them with an exact o knife to get a ridge that holds the strings up. Oh, the strings I made from that crafting wire. The thin kind that you can hang ornaments with. It was kinda rusty in color. 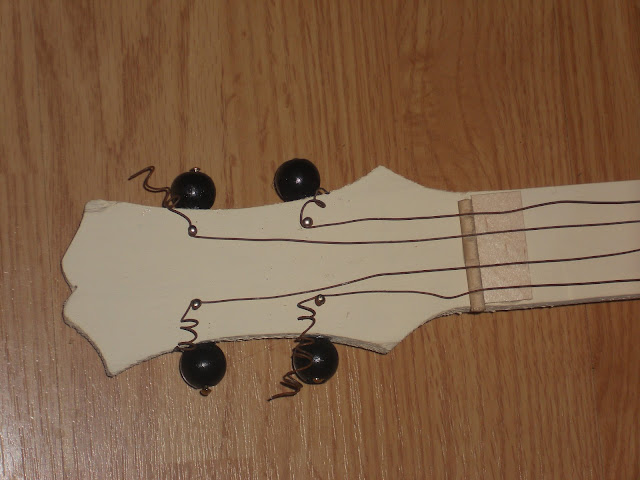 In the pic above, you can see the black knobs holding the wire/strings. Well, those are from a black and white beaded necklace I had broken. I put a dab of hot glue on the inside, and then tacked them in with a tiny nail. The hot glue adds extra hold.

The ends of the wire, I just twirled with an ink pen. Wrap wire around it and slide out the ink pen. That's it. It's a super long guitar. You can't really tell it when it's laying down so here's a pic to show just how long the neck is on it.


Oh, I took a cutout from a magazine of Uncle Sam and traced around him with a star. Cut it out and glued it on the top, red part for decoration. I used that modge podge to seal it. 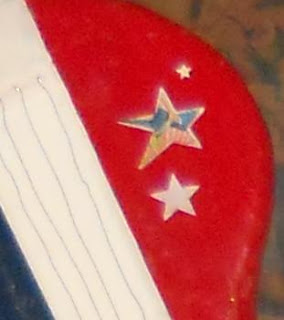 Hard to see above, but then I just stenciled on some off white stars around Uncle Sam.

But if it were gonna be mine, I definitely would have finished it up a lot differently. A LOT! I may have even added some tiny strings of barb wire as the wires. If I could have found it, that woulda been cool! Oh, he added a guitar strap so he could hang it up on the porch. :-)

I just think most items look better roughed up.... What about you?